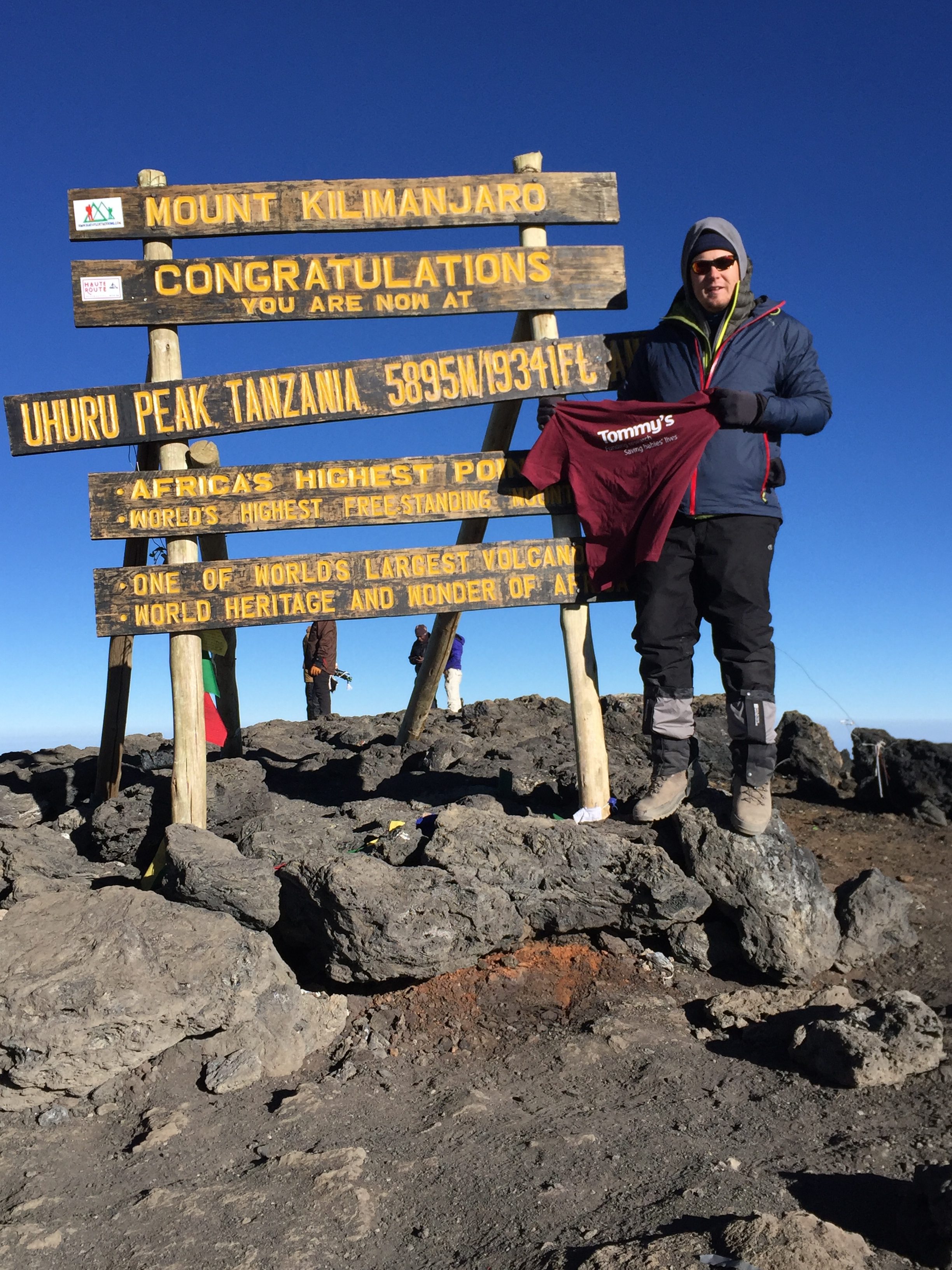 We did it! We reached the summit of tallest free standing mountain in the world! Bring on the tears; Sarah, Margaret and I all had to stop and have a little tear (I’m welling up now!). I think it was a culmination of tiredness, the most challenging thing we’ve ever done and, for me, missing my little family.

Anyway, quite enough of that nonsense 😳

The wake up call came at 23:00 (still day 6 really!), we dress quickly in multiple layers – too many I think but Makeke has spoken and I’d rather be hot than cold! Check my headlight again (I replaced batteries the night before)…nothing?! Bugger. Check/replace batteries again; nothing except a green light with a padlock next to it? Bugger. Luckily Margaret had a spare and lent me that. Phew! (When I’m home a Google will provide an explanation!)

Breakfast at 23:30 (😳) of porridge while our extra water containers are filled with hot water

Set off at midnight; 15 minutes in and we had to stop for people to remove layers!

Not much to say really other than it was dark, cold and flipping hard! As we were about half way through the relentless and endless switchbacks up to Stella Point I hit the wall. I tried various things – eating chocolate, drinking water etc – but my legs just did not want to take another step!

So 4 hours in and I’m walking slower than a snail! I sat at a break stop and if I’d closed my eyes I would’ve been in Neverland in seconds! Thankfully one of the guides (Dale) took my rucksack and encouraged me along the rest of the way. Had it not been for him I probably would’ve just called it a day and regretted it for ever more.

A short, but hard, 45 minute walk up to Uhuru (5985m) saw us standing on top of Africa basking in glorious sunshine and not a cloud in site!

Lots of photos ensued and then we started back down again – 30-40 minutes at 50% less oxygen is plenty for anyone.

Oh! I should add that apart from having no energy, and believing my time on Kili was up, I reached the summit with no symptoms of altitude sickness at all! 😊

The descent back down from Stella Point to Barafu was quick and punishing on the knees and upper legs; scree surfing sounds like fun and is fun, but after several hundred meters of doing it I can assure you it’s not! 😐

Got back to camp around 11:00 with Sarah and Margaret shortly after; Sarah I think was struggling with a headache brought on by altitude…or a lack of sleep?!

Brunch of soup, veg spaghetti and watermelon before getting ready to move on to Millennium Camp (3950m) for the night; and a washy washy session, the first since Karanga! 😄 😷

Afternoon tea of popcorn and then back to the tent for a rest. We’re all still trying to process the fact that we all made it to the summit. Still, after days of walking up, not quite believing it’s all done and all that is left is to walk down.

Dinner consisted of potato, beef and banana stew with pineapple for desert. I treated myself to the Snickers bar that I bought for summit night but forgot to eat…amazing!

Now to bed after being up for nearly 24 hours! Hopefully a good night sleep ready for our 4-or-so hour walk to Mweke gate and the end of our journey.

We made it to Stella Point!